I don’t profess to be an expert in the field of geography, but I can say with confidence that there aren’t too many places in the world where the land and sea form a perfect union as they do in Cabo San Lucas, Mexico. 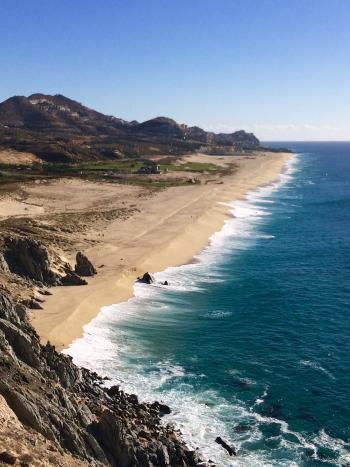 The beautiful beaches of Los Cabos

Located at the southern-most tip of the Baja California peninsula in the state of Baja California Sur, what was once a quiet fishing village is now a vibrant city of 80,000 and one of Mexico’s most popular tourist locales. Together with its sister city of San Jose del Cabo, the two towns comprise a metropolitan area of 300,000 inhabitants commonly referred to as “Los Cabos”. Since 1990, the area has tripled in size and now features many of Mexico’s best resorts, restaurants and golf courses. The 20-mile stretch of mesmerizing coastline between the two cities is appropriately named the “Tourist Corridor”.

It is here in Los Cabos where the calmer waters of the Sea of Cortez collide with the mighty Pacific Ocean and the land truly comes to an end. Over 1,000 miles in length, the Baja California Sur peninsula is the second longest in the world. To put that into context, it is longer than the country of Italy. From any vantage point overlooking the aqua marine waters, you’ll see Los Cabos’ iconic limestone landmark known as El Arco or “The Arch”. Widely regarded as “Land’s End”, your next landing point from this jagged rock formation is the South Pole, 12,500 kilometers away.

If Shangri-la really did exist, Los Cabos might be it. Featuring an arid desert climate and miles of pristine beaches, Los  Cabos is a place people come to engage in a variety of exciting outdoor activities and indulge in authentic Mexican cuisine and culture. What makes this place so appealing is that it has something for everyone. The weather is perfect as temperatures average 24 degrees Celsius and the sun shines 350 days a year.

For outdoor enthusiasts impervious to summer heat, April through December is the ideal time to visit Los Cabos as it is during these months you will see a variety of migrating whales arriving from the cold Alaskan waters 7,000 km away. There are eight species of whales that migrate to the tip of the Baja peninsula including Humpbacks, Orcas, and giant Blues. The most common visitor is the California Gray whale which arrives to gorge in the plankton-rich waters and calve after a 10-month gestation period.

For scuba divers, Los Cabos is known as the “aquarium of the world”, a name bestowed on the destination  by legendary marine biologist Jacques Cousteau 50 years ago. It is the Cabo Pulmo National Marine Park that draws the most attention among avid underwater explorers as more than 800 species of marine animals live within the confines of this 70 sq. km. reef and oceanic ecosystem that was designated a UNESCO World Heritage Site in 2005.

Sport fishing is also one of the most popular outdoor activities in Los Cabos. Every October, the world’s best anglers arrive to compete in the Bisbee’s Black and Blue marlin fishing tournament  for bragging rights and a share of a $3 million purse.
And then there are the Los Cabos sunsets. If you appreciate the radiant colours our biggest star generates, there isn’t a better place anywhere to watch the day’s-end sky illuminate than on the beaches of Los Cabos. 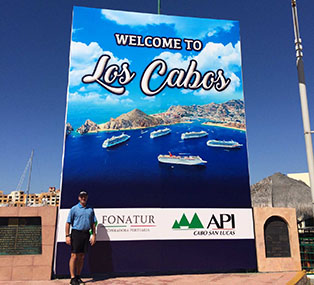 Last but not least are the golf courses of Los Cabos. Much has changed over the past 25 years when the only venue in town was a short 9-hole, government-owned golf course. Just as he transformed the game itself when he played, Jack Nicklaus put Los Cabos on the golf world’s radar having designed six of the 15 courses that now comprise the area’s golf offering. As to be expected, others followed Nicklaus’ lead including the likes of Fazio, Love, Norman, Player, Weiskopf and Woods, all of whom have contributed to shaping the Los Cabos golf landscape. Today, Los Cabos is regarded as one of the top golf destinations in the world. Just ask Golf Digest who named four Los Cabos courses to its February 2018 Top 100 Courses in the World List. (Diamante, Cabo del Sol, Quivira, and Querencia). 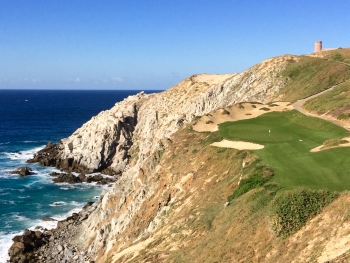 Among the finest on this list is Quivira (pronounced key-vee-ra), the brainchild of Mexican businessman and resort developer Mr. Ernesto Coppel, and centrepiece of an 1,850-acre master planned luxury residential and resort community conveniently located 10 minutes from downtown Cabo San Lucas.

Opened in December, 2014, Quivira is Nicklaus’ latest signature design to appear on the Los Cabos stage. Already ranked the 93rd best golf course in the world, Quivira took an agonizing 10 years to construct giving new meaning  to the saying, “good things come to those who wait.”  When asked to comment at the opening ceremony, Nicklaus described Quivira as, “one of the great pieces of property in the world. We tried to create some excitement on the mountain and in the dunes, and I believe we’ve created a golf course that plays as spectacular as it looks.”

Mission accomplished Mr. Nicklaus, as Quivira gets a 10/10 on the Wow Factor. Measuring 7,085 yards, the golf course sits precariously atop a steep granite plateau alongside the Pacific Coast contiguous to  desert and sea. It is one of the few golf courses in the world that could be described as an ocean, desert or mountain course, or all of the above. How you describe Quivira is your call and will likely lead to a spirited discussion with the others in your foursome after your round. Regardless of the outcome, it’s hard to ignore the fact that from every  fairway on Quivira, you will be afforded stunning views of the vast Pacific Ocean, a claim no other golf course in Los Cabos can make. 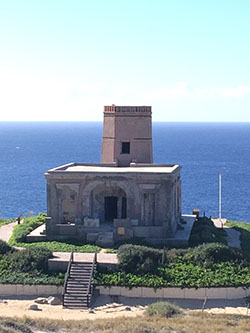 The historic lighthouse at the par 4, 7th hole

Another undisputed claim Quivira can make is that the lighthouse that sits adjacent to the par 4, 409-yard, 7th-hole is the true “Land’s End” of the Baja California peninsula. Built in 1905, this historic site serves as kilometer 0 on the North American continent and the southern-most demarcation point where the Pacific Ocean and Sea of Cortez unite. If time permits, take a walk around the perimeter of the building. Plaques adorn the side of the structure explaining the significance of the lighthouse to the area. Don’t be surprised if you see a pod of migrating Humpback whales frolicking in the distance as you return to the tee.

The essence of Quivira changes as you climb the gentle slope of the neighbouring mountain range. The windswept dunes and rolling desert foothills become more prominent leading you inward towards the “Oasis”, the halfway house situated near the eighth green. It is here where several of the resort’s chefs eagerly await your arrival to showcase their delectable Baja cuisine.

Throughout the back nine,  Nicklaus took great care to protect the indigenous shrubs, trees and cacti to ensure Quivira’s desert golf persona remained intact. Of all the desert flora, none was more impressive than the towering, multi-armed, cardon cacti, many of which are hundreds of years old.

While Quivira may be able to boast having 18 signature holes, one in particular was most memorable. It was along a winding one-mile ascent from sea level to the dramatic par 4, 310-yard, 5th hole, that the grandeur of Quivira first became apparent. Weaving our way from the base of the 4th green, it took several minutes to arrive at the 5th tee, a postage stamp-sized hitting area carved tightly into the side of a sheer granite cliff 275 feet above crashing waves below. 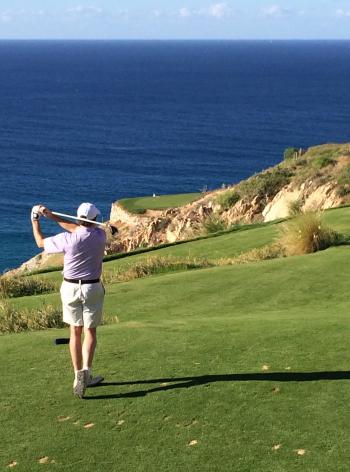 The spectacular 5th hole at Quivira

This was the first of Quivira’s many jaw-dropping vistas, the kind where you abruptly stop your golf cart, remove your camera (or I-phone) and launch into the first of several photo-op sessions. If you found this place to be unlike any other you’ve experienced on a golf course, you’re not alone. When asked to describe the 5th hole, Nicklaus stated, “from the first time I saw this extraordinary site, I knew this would be an amazing location for a short par 4. It is the character of the hole that makes it one of the most visually stunning par 4’s in the world.”

While I wouldn’t describe Quivira as a public golf course, it is accessible to guests at all four of Mr. Coppel’s local Pueblo Bonito resorts (Los Cabos, Pacifica, Sunset Beach and Rose’) as well as the neighbouring residential communities of Copala, Coronado, Montecristo Estates, and Novaispania. Like the other top courses in the area, Quivira is pricey as green fees were $345/player when I visited. 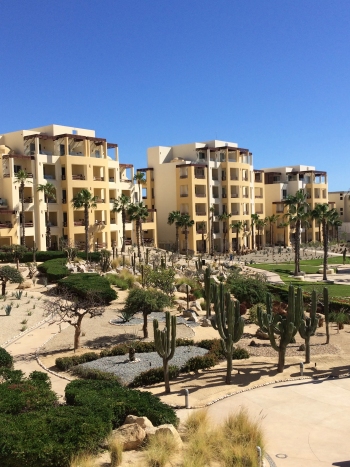 The Pueblo Bonito Pacifica Golf & Spa Resort is closest to the golf course and is the latest addition to Mr. Coppel’s repertoire of 5-star resort properties.

Nestled on a secluded three mile stretch of pristine beach in Cabo San Lucas, the  Pacifica Resort is an all-inclusive luxury resort exclusively for adults. The 154-room retreat features four restaurants, four bars, the Armonia wellness-inspired spa, and access to its own private beach. In December 2016, the resort unveiled The Towers at Pacifica, three ultra-exclusive buildings that provide guests with decadent amenities including their own private butler service. Golf at Quivira is a la carte but easily arranged in advance of your arrival or via the resort’s concierge.

The only regret about my recent visit to Los Cabos is that it was at least two weeks too short. I could have stayed here indefinitely – especially during our winter months – expanding my sampling of all that Los Cabos has to offer. Whether you come to play some of the world’s best golf courses, participate in a scuba diving or whale watching expedition, experience Mexican culture, or simply relax and rejuvenate, Los Cabos will not disappoint. This is a special place worthy of all the accolades it receives. After you visit I’m sure you’ll feel the same way. 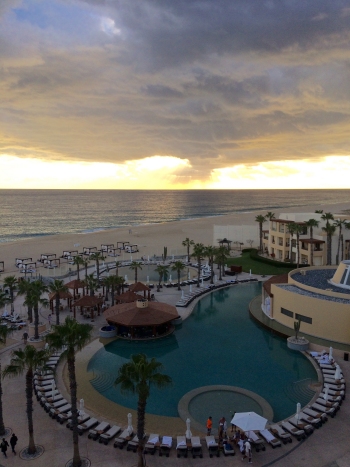 Pool side at Pacifica

How to Get There:
Both Air Canada and Westjet fly to Los Cabos throughout the year. Visit www.aircanada.com and www.westjet.ca for more details.