More has been written about the state of Hawaii than any other place on earth and for good reason. Comprised of eight unique volcanic islands two thousand miles from the nearest continent, the U.S.A.’s 50th state is so geographically diverse that it is impossible to fully appreciate just how wonderful this place is after a mere one week visit. Fortunately I was able to return to Hawaii for a second time this summer to partake on a golf extravaganza organized by Prince Resorts Hawaii that would involve playing ninety-nine holes of golf at five different golf courses on the islands of Oahu, Maui and Hawaii in nine days. (Yes I know, a daunting task but an assignment I was willing to assume and a challenge I was certainly keen to accept).

Despite its remote location, Hawaii attracts approximately 10 million visitors from around the world every year. With its perfect climate, (temperatures hover between 70 and 85 degrees all year) pristine beaches, warm azure waters, and 100+ golf courses it is not surprising that Hawaii is the world’s most desirable tourist destination.

After 11 hours of air travel from Toronto I arrived in Honolulu on the island of Oahu. Oahu is Hawaii’s third largest island and is home to 80% of the state’s 1 million + residents. Fittingly, Oahu means “gathering place”. Honolulu is the state’s cultural, economic and political capital best known for Waikiki Beach, and Pearl Harbor.

The first stop on my tour was at the Hawaii Prince Golf Club, a 27-hole layout designed by Arnold Palmer. If you stay at the Prince Hotel Waikiki – the hotel I stayed in the night before- or any other hotel in Waikiki, give yourself at least 30 minutes to travel to the golf course otherwise you’ll be late for your tee time.

I found the golf course to be a fair and decent test comprised of three unique nine-hole configurations. The verdant Waianae Mountains looming in the distance added to the experience often distracting me from my game.

Unfortunately I was only on Oahu for two days. During my short visit I did manage to experience the vivaciousness of Waikiki Beach and the solitude of the Oahu countryside. Within an hour’s drive of Honolulu you can be at the island’s north shore, Oahu’s rugged coastline renowned for the best surfing in the world.

My next destination was Maui, a short 30-minute flight from Oahu. Maui is the second largest island in the chain and is home to more 5-star hotels and golf courses than any other island in Hawaii. My destination was the luxurious Maui Prince Hotel in Makena, a 45-minute drive from the Kahului Airport. Located alongside the ocean, the Maui Prince Hotel, Makena Resort is regarded as one of the finest hotels on the island famous for its open-air balconies, koi ponds, waterfalls and atriums. Unlike its counterpart in Honolulu, the hotel is located adjacent to the two golf courses at the resort, something I was pleased to discover given I had a 7 a.m. tee time the following morning at the Makena South Course.

Two outstanding golf courses comprise the golf experience at the Makena Resort. Simply referred to as the North and South Courses, both were meticulously designed by Robert Trent Jones Jr. and are situated on the western side of Haleakala; Maui’s 10,000-foot dormant volcano. The 7,014-yard South Course is the only course on the south shore of Maui that features golf holes along the oceanfront. The 514-yard, par 5, 10th hole is widely regarded as the signature hole on the South Course because of both its difficulty and breathtaking views overlooking the ocean and crescent-shaped peaks of Molokini.

Even more spectacular is the 6,914-yard North Course. Most of the golf course ascends the lush slopes of Haleakala providing views that words cannot accurately describe. 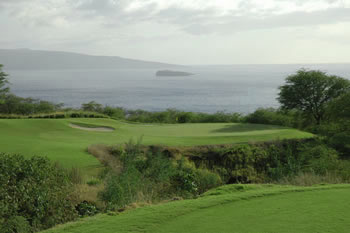 From 800 feet above sea level you are afforded vistas in all directionsof the island. Add a typical Maui sunset to the equation and you’ll be reluctant to complete your round and return to the clubhouse. I have had the privilege of playing many great golf courses around the world but there was something particularly magical about the July afternoon I played the Makena North Course.

As was the case in Oahu, my time on the island of Maui was too short. After a brief two day visit I was en route to Hawaii, the largest island in the state and appropriately referred to as the “Big Island”. During the short 30-minute flight from Maui I can vividly recall the aerial views of the Big Island and being in awe of the back volcanic rock that covered the landscape for miles in all directions. Despite the desolateness of the terrain, I was amazed by what Mother Nature had done and the power she possessed. Two enormous 14,000-foot volcanoes, Mauna Kea and Mauna Koa, were responsible for the landscape I had now set foot on. Neither is active today; however, in the southeast region of the island the Kilauea Caldera continues to emit lava into the ocean providing a breathtaking spectacle best viewed at dusk. 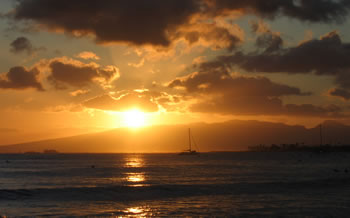 From the Kona International Airport I headed north along the west coast to the five-star Mauna Kea Resort. Comprised of two world-class hotels, the origins of the resort date back to 1965 when Laurance S. Rockefeller had the foresight to build the first luxury hotel on the island.  It was appropriately named the Mauna Kea Beach Hotel due to its close proximity to the neighbouring Mauna Kea volcano. Thirty years later the Hapuna Beach Prince Hotel was built completing the exquisite Mauna Kea Resort that now encompasses approximately 2,000 acres on the Big Island’s Kohala Coast.

I had the privilege of staying at the impeccable Hapuna Beach Prince Hotel, arguably the crown jewel in the Prince Hotel chain. Featuring 350 elegantly appointed rooms and suites, the hotel is nestled on the secluded white sands of Hapuna Beach. Adjacent to the main hotel is the “Hapuna Suite”, an 8,000 square-foot villa designed specifically for the rich and famous. For $7,000 US per night the villa is yours complete with your own 24-hour butler.

In addition to the fine hotels and pristine beaches, the Mauna Kea Resort is widely regarded as the finest golf destination on the Big Island. Two exceptional golf courses are available for guests of the resort – the 6,875-yard Hapuna Golf Course and the 7,124-yard Mauna Kea Golf Course. The former course was designed by Arnold Palmer and is considered to be more player-friendly than its neighbouring counterpart. With its breathtaking ocean vistas, it comes as no surprise that multi-million dollar homes are being constructed alongside the fairways of the golf course.

The Mauna Kea Golf Course is undoubtedly the best golf course on the Big Island and one of the finest designs in Hawaii. Golf Digest magazine consistently rates Mauna Kea one of the best resort courses in the United States and for good reason. Designed by Robert Trent Jones, Sr., the golf course features several of the best ocean-side golf holes in the world. The par 3, 261-yard, 3rd hole in particular truly epitomizes what ocean–side golf should be like. It is this formidable par 3 that earned the respect of none other than Jack Nicklaus as even he struggled to reach the green from the back tee. There isn’t an ordinary hole at Mauna Kea; however, in addition to the 3rd hole, the 9th, 11th and 18th holes are particularly extraordinary. 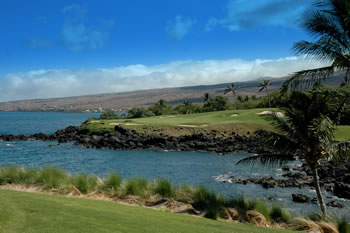 After sinking my final putt at Mauna Kea I remember feeling a little melancholy. I had now completed my ninety-nine holes of golf in nine days and wished I could start the adventure all over again. The next day I would be on a plane flying back to Canada, leaving one of the few places on earth that I could easily adopt as my new home. Although I was on assignment to report about golf on three different islands, I realized that Hawaii is much more than a great golf destination. It is a special place on our planet that simultaneously humbles you with its energy, intrigues you with its diversity, and astonishes you with its natural beauty. It is a place where great golf courses simply add to an already perfect landscape. My wish for all of my fellow golf enthusiasts is that you somehow find the opportunity in your lifetime to visit the islands of Hawaii to be humbled, intrigued and astonished the way I was while standing on the fairways of the best golf destination in the world.