I’ve been on the road for nearly two hours. I’ve managed to navigate my way through Atlanta’s frenetic bumper-to-bumper traffic and am en route along the I-20 to Greensboro, Georgia, home to the secluded confines of what Conde Naste Traveler magazine recently called the “No. 1 Golf Resort” in North America as part of its “Top 100 Golf Resorts” list. I finally see the road sign I’ve been eagerly looking for on my left – Linger Longer Road and the gateway to my final destination – Reynolds Plantation. At last I’ve arrived at the place The Robb Report once referred to as the “Best of the Best Golf Community” in the United States.

Located midway between Atlanta and Augusta, Georgia, sprawls a rural golf getaway that gives new meaning to living the good life. Playing golf is the primary reason for my visit to Reynolds Plantation, but if you like to indulge in other activities like boating, fishing, tennis, biking and hiking, you’ve certainly arrived at the Shangri-la of outdoor living. 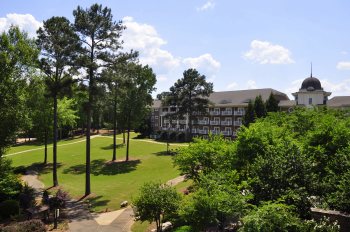 The brainchild of businessmen Mercer Reynolds Sr. and James Madison Reynolds, the plantation’s origins date back 100 years ago when the two men acquired 10,000 acres of land in the Oconee River Valley. It was along the banks of Richland Creek where they built a hunting and fishing lodge, the place they later christened “Linger Longer”, as both were always reluctant to leave after spending time here. While much has changed over the years, the one thing that has remained constant is the linger longer lifestyle initiated by the plantation’s patriarchs. If you’re looking for rousing and raucous, look elsewhere; Reynolds Plantation is a place to come and unwind and indulge in the wonders of nature. For golfers, it really doesn’t get any better than Reynolds Plantation. At centre stage are six championship golf courses designed by the likes of Bob Cupp, Tom Fazio, Rees Jones and Jack Nicklaus. One course is private (The Creek Club); however, the other five are totally accessible to guests of the plantation year round. The five courses I played were all exceptional and uniquely different which explains why I played them all more than once. In fact, by the end of my week’s stay I probably played more golf than most people I know do in an entire year. 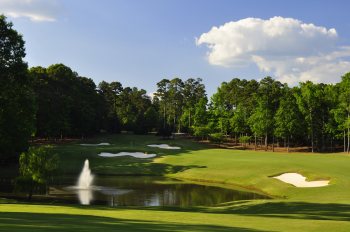 The first course I played was the National Golf Course, Tom Fazio’s fabulous contribution to the Reynold’s golf repertoire. Originally opened in 1996 as an 18-hole design, a third nine was added to the National in 2000 which now features 27 tree-lined holes with wide, sweeping fairways and the best greens west of Augusta, GA. Each nine – the Ridge, Bluff and Cove – has its own personality and is named for the type of terrain it features.  Beautiful estate homes tucked backed beyond the fairways add to the character of the National which was named by Golfweek as one of America’s “Top Real Estate Courses”. 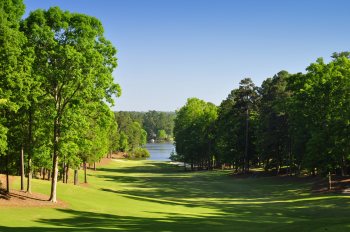 Cupps’s other course, The Landing, was acquired by Reynolds Plantation in 2005 . Built in 1986, The Landing (formerly the Port Armor Golf Club) was the first golf course designed on neighbouring Lake Oconee, and at the time of its launch, was ranked as one of Georgia’s best golf courses – second only to Augusta National. “The problem was not finding 18 holes; the problem was deciding which of the thousands of holes were the best,” architect Bob Cupp said when asked to comment on the first of his two designs. 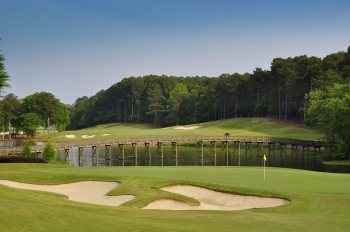 Not to be outdone is the spectacular Oconee Course. Designed by Rees Jones, the 7,029-yard Oconee Course opened in 2002 and is appropriately named after the 19,000 acre lake that serves as the focal point of Reynolds Plantation. Water comes into play on nine holes, including each of the final three, which are among the best finishing holes I’ve seen. In addition to the vistas, what I appreciated most about Oconee was its fairness and playability. The sightlines from tee to green are impeccable – no gimmicks, blind shots or hidden hazards. What you see is what you get which is why, upon reflection, Oconee was my personal favourite of all of the courses at Reynolds Plantation. Despite the sweltering 90 + degree heat, I played the golf course three times – it was that good. 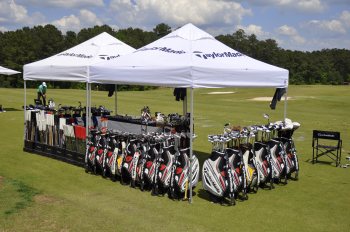 Your Choice at the Kingdom

It is at the Oconee Course where you will find the Reynolds Golf Academyand teaching professional Charlie King. A fixture at Reynolds Plantation for over 10 years and one of Golf Digest’s Top 50 teaching professionals in the U.S., Charlie King prides himself on his simple approach to the game. In need of a swing fix or adjustment?  Take a lesson from Charlie – you’ll appreciate his understandable style and his ability to demystify the golf swing. 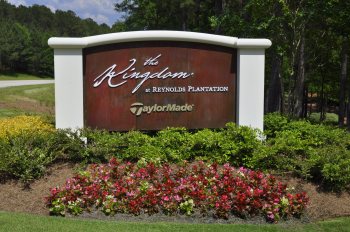 Welcome to The Reynolds Plantation

The other phenomenal amenity at Reynolds Plantation is for hard-core golfers only. Located on the opposite side of the golf academy is a place simply referred to as “The Kingdom”. This is TaylorMade-Adidas’ world-class club fitting facility where serious golfers come to test equipment designed to meet their precise specifications. It’s the same as buying a handmade suit from the finest tailor in town and the reason PGA TOUR pros like Justin Rose and Sergio Garcia are frequent visitors. If you’re looking for a new set of clubs, a putter or driver, be sure to make an appointment at the Kingdom during your stay. 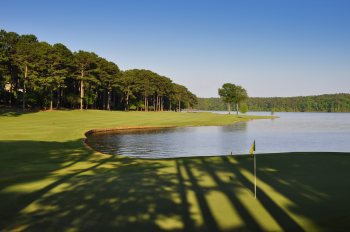 The final course I played at Reynolds Plantation was the Jack Nicklaus-designed Great Waters course. Measuring 7,073 yards, Great Waters is a tale of two nines as the front side meanders through the pine forests of the plantation. By the time you set foot on the 9th tee you’ve arrived back at Lake Oconee whose shimmering waters come into play on every hole on the back nine. Former host to the Anderson Consulting World Championship of Golf and the 2014 edition of the Big Break, Great Waters has deservingly received more accolades than I can possibly mention. “The first time I went to Reynolds Plantation, I knew we had the potential to have a great golf course. I think we found it. It’s one of the really great pieces of property that I have ever had the experience to work with,” said Jack Nicklaus when asked to reflect on his Great Waters design.

Although my stay at Reynolds Plantation only lasted a week, I was fortunate to experience much of what makes this place so special. Like others who have visited, it didn’t take me long to realize that the catchphrase “linger longer” quickly takes on a whole new meaning once you arrive and immerse yourself in all there is to do here. I have no doubt you’ll find yourself reluctant to leave and will want to linger as long as you can at what is one of the best lifestyle communities and collection of golf courses you’ll find anywhere. My only regret was that I couldn’t stay and linger just a little bit longer. Next time for sure.

Getting There:
From Toronto, Air Canada has daily non-stop flights to Atlanta. Reynolds Plantation is approximately a two hour drive from Atlanta’s Hartsfield Airport.

Where to Stay:
Reynolds Plantation guests can stay at the Ritz-Carlton Lodge, a AAA Five Diamond property featuring 251  suites, a 26,000-square foot spa, private beach and a selection of fine, casual and lakefront dining.  There are also private 3 and 4 bedroom condominium suites available that rival any 5-star hotel.

Great Places to Eat:
There are seven restaurants at Reynolds Plantation offering something for everyone. My three recommendations are Gaby’s by the Lake, Georgia’s Bistro and the Linger Longer Steakhouse, located at the Oconee Clubhouse.

Other Great Outdoor Activities:
Golf is not the only activity Reynolds Plantation is known for. Boating and fishing are equally popular as Lake Oconee is home to three full-service marinas and more fish per acre than any other lake in Georgia. Miles of biking and hiking trails meander through the property. Tennis is also a local favourite as the Tennis Centre at the Lake Club offers four Har-Tru and four traditional courts.