Appropriately referred to as the “Garden Isle”, Kauai is arguably the most beautiful place on earth. I had the distinct privilege of visiting this island paradise in December 2004 where I was treated to a week of great golf, decadent Hawaiian cuisine, and unsurpassed Kauai hospitality. My only complaint was that my trip was too short as this is one vacation destination that should be enjoyed for as long as time permits.

Hawaii’s island of Kauai is one of the few places in the world that time has left alone. What makes this statement particularly significant is that Kauai was formed by a series of volcanic eruptions over 5 million years ago. The first Hawaiian island to be populated, archaeologists believe Kauai’s first settlers came from neighbouring Tahiti and Samoa around 500 A.D. It wasn’t until 1778 that Captain James Cook was credited with “discovering ” Kauai having set foot on the west coast in the town of Waimea.

What intrigued me most about Kauai was its remoteness and geological diverseness. One of eight, and the oldest in the chain of the Hawaiian Islands, Kauai encompasses 533 square miles in the middle of the mighty Pacific Ocean. At its furthest points, Kauai measures 25 miles long by 33 miles wide. Remarkably, most of the island remains untouched, as only 3% of the total land area has been developed by Kauai’s 58,000 residents. Coffee plantations, taro fields, and guava orchards are commonplace; however, the majority of Kauai remains an outdoor adventure playground for those who enjoy such activities as surfing, deep-sea fishing, hiking, horseback riding and biking. Fortunately, Kauai is committed to preserving its natural beauty having enacted laws that protect the island from further commercial and residential development. How many places do you know that prohibit the construction of buildings that exceed the height of a mature coconut palm tree?

Encircling the island sprawl 111 miles of breathtaking coastline. It is on the northwest shore of Kauai that you will discover the famous Napali Coast – a 10-mile stretch of 3,000-foot high verdant mountain cliffs that seem to rise endlessly from the depths of the ocean floor. The best way to see these towering peaks and lush inviolate valleys is by boat. There are plenty of catamaran cruises to choose from bringing you within arms reach of the most beautiful shoreline in the world. Spinner dolphins can be seen racing through the azure pacific waters alongside the bow of the boat further adding to an already surreal experience. 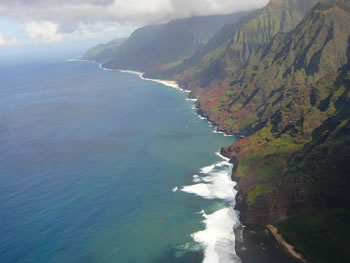 If ocean travel doesn’t agree with you then be sure to partake on one of the many helicopter tours that regularly depart from Lihue, Kauai’s capital and largest urban center. Within one hour you will see the most spectacular places on the island including the awesome 3,500-foot deep Waimea Canyon, frequently referred to as the “Grand Canyon of the Pacific”, and the mystical Mount Wai ‘ale ‘ale – an extinct 5,000-year old volcano renowned for its mist-covered peaks and cascading waterfalls.

If all of this doesn’t sound enticing enough, consider that there are 43 pristine, white sand beaches scattered across Kauai’s unspoiled shores. Many are home to the world’s best surfing venues including the legendary Hanalei Bay. Widely regarded as the most beautiful beach in Hawaii, this

two-mile crescent shaped expanse is what I imagine heaven on earth would be like. It is here that the classic love story “South Pacific” was filmed amidst the romantic mountain setting of Bali Hai.

For those who have traveled great distances to Kauai to play golf, I guarantee you won’t be disappointed. With its jaw-dropping scenery, perfect climate and phenomenal golf courses its no wonder that Kauai has emerged as one of the world’s most popular golf destinations. There are a total of nine golf courses on the island all designed to challenge your acumen of the game and stimulate your senses.

Nowhere is this more obvious than at the Princeville Resort. Located on the north shore, 30 minutes from Lihue, Princeville is a destination fit for the likes of kings and queens. Delicately carved into the side of a cliff overlooking Hanalei Bay, the resort’s 252 luxurious rooms blend effortlessly with their surroundings. There are two championship golf courses at the resort – the infamous 7,309-yard, 18-hole Prince Course and the more benign 27-hole Makai Course. Robert Trent Jones Jr., the designer of both, has said, “in all the world, I would never expect to see a more spectacularly beautiful place to build a golf course than Princeville”, and he’s not exaggerating. Both courses are a pleasure to play, however it is the more formidable Prince course that attracts the most attention. In 2003, Golf Week magazine ranked the Prince course the number one golf course in Hawaii. With a course rating of 75.3 and a slope rating of 145, the Prince Course is not for the faint of heart. For the average player, be prepared to join the ranks of those who have gone before you who have been punished by this behemoth of a golf course. Rumour has it that tucked amidst the Prince’s plentiful groves of mango and guava trees are more than three million stray golf balls. 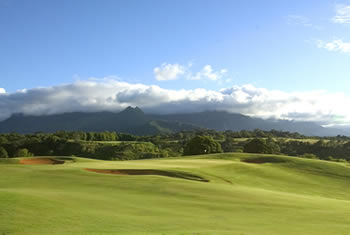 A driver’s distance away is the Makai Course, a nine-hole triumvirate consisting of very distinct designs as the names “Ocean”, “Lakes”, and “Woods” would suggest. For you land-locked souls, you’ll likely find the Ocean course to be especially appealing. The 204-yard, par-3 7th hole best personifies the Ocean course, as this hole is as difficult as it is spectacular. Time permitting, be sure to wander back to the championship tees and savour the scenery that encompasses you. If you’re lucky you might see a pod of humped back whales breaching in the distance. 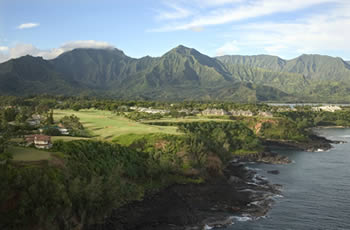 Like its Princeville brethren, the Kauai Lagoons Golf Club is another “must play” on the island. Located on the picturesque southeast coast in Lihue, Kauai Lagoons features two award-winning Jack Nicklaus designs – the Scottish links-style 6,960-yard Mokihana Course and the ocean side 7,070-yard Kiele Course. The former course has been rated by Golf Magazine as one of the most playable golf courses in America and is the more kinder and gentler of the two. The Kiele Course is a true championship Nicklaus design comprised of two very distinct nine-hole configurations. The front side is typically more difficult as vast groves of exotic foliage engulf many of the holes. The inward nine tends to distract golfers from the task at hand as magnificent views of the Pacific Ocean and Kalapaki Bay abound.

At center stage of Kauai Lagoons is the resort’s Kauai Marriott Resort and Beach Club. Nestled alongside the white sand beaches of Kalapaki Bay, this magnificent hotel is home to a 26,000 square foot swimming pool, the largest on the island.

Continuing south, golf enthusiasts will by now have heard about another one of Kauai’s 18-hole masterpieces, the incomparable Poipu Bay Golf Course. Designed by Robert Trent Jones Jr., in collaboration with Mother Nature, Poipu Bay is one of those rare golf courses you encounter that seems to have always existed in its present day form. Poipu Bay is the perfect coming together of land and sea flowing elegantly atop 210 oceanfront acres. Measuring 7,043 yards, Poipu Bay is Kauai’s version of Pebble Beach as holes 15 through 17 run a mere two-putt distance away from the Pacific Ocean. With the sound of waves crashing into the shore some 100 feet below it’s obvious why Poipu Bay’s finishing holes are some of the most photographed holes in golf. Fittingly, every year since 1994, Poipu Bay has hosted the Grand Slam of Golf, the season’s grand finale for the PGA Tour’s four major championship winners.

Adjacent to the golf course is the luxurious Grand Hyatt Kauai Resort and Spa, a 607-room palace renowned for its meticulous gardens, soothing waterfalls, and award winning cuisine. After dinner at the sumptuous Tidepools Restaurant be sure to visit Stevenson’s Library, the hotel’s lively library-bar that features nightly jazz entertainment. 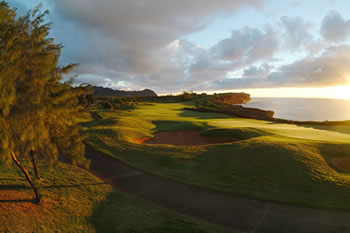 The 16th Hole at Poipu Bay

Within a short 15 minute drive from the resort is another golf course worthy of mention. The 6,885-yard Kiahuna Golf Club has recently undergone a $4 million face-lift under the careful guidance of architect Robert Trent Jones Jr. Committed to providing a more leisurely golf experience, the Kiahuna Golf Club more than adheres to its credo of offering “Eighteen holes of Aloha” to all of its guests.

As I write this article and reflect on my trip to Kauai I can’t help but think that this was truly a trip of a lifetime. Whether you travel to Kauai for its incredible golf or not doesn’t really matter. Kauai is one of the few special places on earth where its equally acceptable to do as much as possible or absolutely nothing. If your experience is anything like mine, I’m sure you’ll wake up one morning and think you’ve died and gone to heaven. I know I did – every day I was there.

For more Information or to Book a Golf Holiday Contact: