Golfing in Scotland- As Pure as Golf Gets

Golfing in Scotland- As Pure as Golf Gets

It’s hard to imagine that golf was once banned in what is widely regarded as the birthplace of golf. Although golf in Scotland dates back to the 1400’s, the game was banned by King James II in 1457 who felt that it was distracting his army from archery practice. Thankfully the ban was repealed shortly thereafter paving the way for what has become the world’s most renowned golfing destination.

Given its proximity to water, rolling terrain and windswept landscapes, it seems only fitting that golf originated in Scotland some 600 years ago. With over 500 golf courses scattered across its countryside, it comes as no surprise that Scotland has more golf courses per capita than any other country in the world. In addition to the country’s spectacular physical attributes, what makes golf so special in Scotland is that it remains a game to be enjoyed by all. Sure there are courses like Muirfield that are as difficult to play as Augusta; however, most of Scotland’s greatest golf courses can be easily accessed by locals and visitors alike. Even the Old Course at St. Andrews can be played by just about anyone. In fact, many people don’t realize that the Old Course is one of six public golf courses located in the charming town of St. Andrews (pop. 20,000), the town where Prince William previously lived while attending university. Historically, over 40,000 rounds of golf are played on the Old Course at St. Andrews every year – and the course isn’t open on Sundays.

I had the pleasure of visiting Scotland for the first time in April, 2005. Like all golf enthusiasts, Scotland was the one place I had to visit during my lifetime. I wanted to visit the famed Old Course at St. Andrews and experience what it was like to play an authentic links-style golf course like Turnberry. Fortunately I was able to play both in addition to some lesser-known courses that were equally impressive.

One such course was the Number 2 Course at the Gullane Golf Club, a club established in 1882. In total, Gullane boasts three 18-hole links courses, all of whom have hosted various amateur championships and qualifying tournaments for the Open. Located in the region of East Lothian alongside the Firth of Forth, Gullane is a one-hour drive east of Edinburgh. I had the privilege of playing the 6244-yard Number 2 course, host of the 2002 Seniors Open Amateur Championship, on what was the windiest day of golf I had ever experienced. What I considered to be extreme playing conditions were considered to be “normal” by my playing partner who coincidentally hailed from nearby Edinburgh. This being my first round of the trip, I quickly realized that golf is played very differently in Scotland than in Canada or the U.S. Not only are the golf courses dissimilar, the ever-present wind forces you to be more creative with all of your shot selections. Being able to hit a “knock-down” shot with a variety of clubs from any distance was a prerequisite to simply advancing your way around the golf course. In addition, there is no such thing as “winter rules” or “lift-clean-and-place”. In Scotland you play the ball where it rests regardless of the lie.

Like any avid golfer, subjecting oneself to the same test of golf that has challenged the game’s greatest players, has a certain appeal. After all, wouldn’t it be great to experience the same 30 mph winds, fescue-lined fairways, penal sand bunkers and impenetrable gorse bushes that have brought many Open participants to their knees.  Regular Open venues such as Royal Troon, Muirfield, Carnoustie, and the aforementioned Old Course at St. Andrews and Turnberry provide such an opportunity. I had the good fortune to experience the two latter courses on this trip and neither one disappointed.  In fact, after reflecting on my experience, Turnberry may be the best the golf course I have ever played.

Located on Scotland’s Ayrshire coast, 1 ½ hours southwest of Glasgow, Turnberry was originally developed as a train station for a railway company in 1906. A luxury hotel was built afterwards and Turnberry’s reputation quickly evolved becoming one of Scotland’s grandest social and sporting venues. Unfortunately its intended purpose wasn’t fully realized until the 1950’s after being restored by architect MacKenzie Ross in 1946. The history of Turnberry and the significance it played in both the first and second world wars remains evident to this day as remnants of old landing strips still border the fairways of its two golf courses.

The pioneers of Turnberry would be pleased to see what exists today. The one hundred-year-old grand hotel is now part of the Westin Turnberry Resort; a 221-room, 5-star facility owned by Starwood Hotels and Resorts Worldwide Inc. 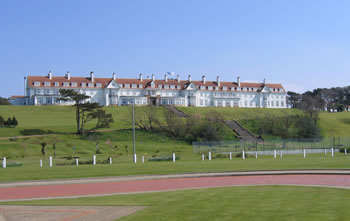 There are 45 holes of golf at Turnberry including the famous 6976-yard Ailsa course, the lessor known 6861-yard Kintyre course and the nine-hole Arran course. It is the Ailsa course which is world renowned and routinely appears on the list of best golf courses in the world of several leading US golf magazines. It is Turnberry’s crown jewel having hosted numerous tournaments including the 1977, 1986 and 1994 Open Championships. Who can forget the “duel in the sun” between Jack Nicklaus and Tom Watson in 1977, when, after posting identical scores after three rounds of play, the two were paired together for the final round, treating the crowds to one of the most exciting finishes in the history of the game. In the end the younger Tom Watson prevailed by one shot posting a sensational 65 capturing the second of his five Open Championships.

What makes the Ailsa course so special is its proximity to the sea and the naturalness of the surroundings. This is perhaps the most perfect example of links golf you will find anywhere in the world. The course extends alongside the Ayrshire coastline for most of the first 12 holes before turning inward leading you back to the clubhouse. The day I played the Ailsa course it was extremely windy forcing me to figure out how to play foreign knock-down and bump and run shots. It was a game of golf I was unfamiliar with having grown accustomed to the more benign playing conditions of our Canadian summers. Despite feeling like I had just gone ten rounds with Mike Tyson, I thoroughly enjoyed every moment I spent on the golf course. My favourite hole at Turnberry is the 454-yard par-four ninth hole. This is one of the most famous (and photographed) holes in golf and understandably so. Running adjacent to the sea this hole brings you closest to the course’s indelible landmark, a magnificent lighthouse that can be seen from every vantage point on the property. I remember standing on the tee basking in the warm sunshine, staring at the lighthouse and vast blue sea quite content to savour the experience for as long as I could before having to hit my next tee shot and move on. Acclaimed golf course author and historian Donald Steel wrote about the Ailsa course in his book entitled, The Classic Golf Links of Great Britain and Ireland. In it he wrote, “as a stage for great events, it is ideally cast. It is however at its best when the crowds have gone and the evening sun is reflected on land and sea. There is nowhere lovelier.” I would certainly agree. My day on the Ailsa course at Turnberry was one I will not soon forget. 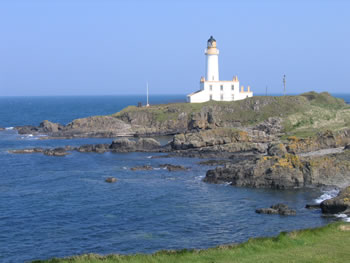 For obvious and different reasons, the same can be said about the Old Course at St. Andrews. I had the privilege of playing the oldest golf course in the world during my recent trip and it truly was a surreal experience. Despite the typical Scottish spring weather (cool, windy and raining) nothing was going to dampen my spirits the morning of my tee time. After all, here I was at the “home of golf”, the venue of twenty six Open Championships dating back to 1872 and the place where Sam Snead, Jack Nicklaus, Seve Ballesteros, Nick Faldo and Tiger Woods had hoisted the coveted Claret Jug. Equally exciting was the fact that St. Andrews was preparing itself again to host the 2005 Open in July where the game’s greats will soon congregate (including Jack Nicklaus for the last time) and compete for golf’s most cherished prize.

As someone who appreciates golf’s history and tradition, it came as no surprise that I had more than a mild case of the first-tee jitters prior to commencing my round. I can vividly recall standing on the first tee of the Old Course at St. Andrews in front of the mystical Royal and Ancient clubhouse trying to convince myself that this was just another golf course. The problem was this wasn’t just another golf course. This became apparent to me in the middle of my backswing as I subsequently proceeded to hook my tee shot through the adjoining 18th fairway and onto the road in front of the famous Rusacks Hotel. Needless to say, I was somewhat embarrassed as the first/eighteenth fairway is one of the widest, most forgiving fairways in golf (its 129 yards wide!). Fortunately my caddy – a prerequisite for anyone playing St. Andrews for the first time – who had befriended me 30 minutes prior, had seen this happen many times before and kindly told me to hit another ball. I did, this time safely down the middle of the fairway. I was now on my way and about to experience the hallowed fairways of the Old Course at St. Andrews. 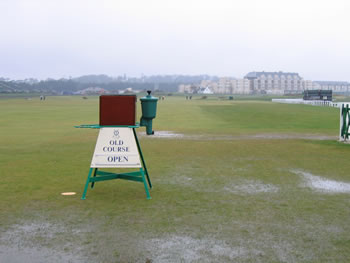 My day at St. Andrews passed too quickly. As I walked over the famous Swilcan Bridge en route up the 18th fairway I realized that in order to truly appreciate St. Andrews you had to play the golf course more than once. As my caddy noted throughout my round, because of the ever-changing weather conditions, the golf course never plays the same way twice. Club selection varies on every hole from day to day depending on the prevailing winds. Add to that St. Andrews’112 infamous bunkers and it becomes obvious why the golf course has proven to be the most formidable and unpredictable test in all of golf. What other golf course in the world has a name not only for all of its eighteen holes but for each one of its bunkers as well. With names like “Hell”, “the Coffins” and “Cat’s Trap”, its obvious why the Old Course is both feared and revered. Despite its voraciousness and unrelenting challenge, I would concur with golf legend Gene Sarazen who said, “I wish that every man who plays golf could play St. Andrews once.”  I would add to that by saying that I wish that every man/woman who plays golf could visit Scotland once. It truly is an experience of a lifetime.

Getting there:
British Airways has daily flights from Toronto to London’s Heathrow airport. Connecting flights from Heathrow to Glasgow and Edinburgh