When you think of the best golf destinations in the world places like Scotland, Ireland and Hawaii immediately come to mind.  Here at home, it’s not uncommon to hear avid golfers rave about the likes of Prince Edward Island and Ontario’s Muskoka Region. Talk to any of our western Canada brethren and they’ll quickly point out that this list is grossly inadequate because it doesn’t include British Columbia’s pristine Vancouver Island. Having visited the island this past June I would certainly agree. Not only is Vancouver Island one of the most beautiful places on earth, it is also home to some of the best golf courses in the country.

Don’t just take my word for it. Recently readers of Travel + Leisure magazine named Vancouver Island “The Best Island in the Continental US and Canada” in the magazine’s 10th annual World’s Best Awards readers’ survey and voted the island the sixth best island in the world. Not surprising as this temperate island offers an irresistible mix of unspoiled wilderness and world-class lodging.

Getting to Vancouver Island is simple from anywhere in North America. After landing in Comox via Vancouver, I headed north to Campbell River en route to the rustic Painter’s Lodge where I would begin my “fins and skins” adventure the following morning. An angler’s paradise since the early 1900’s, Campbell River is famous for its plentiful chinook, coho and sockeye salmon that migrate through Discovery Passage en route to their final spawning grounds. Catching a 20-lb fish is commonplace as the salmon funnel into the passage with each tide cycle of the Pacific Ocean. 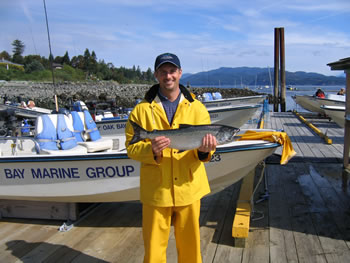 Salmon Fishing on the Campbell River

The “fins” component of my “fins and skins” experience began at the ungodly hour of 5 a.m.– the time of day when even the sun contemplates its rise. After meeting with my experienced guide and preparing our sleek seventeen-foot Boston Whaler we eagerly headed out to sea. It wasn’t long after we set sail that the lines in our boat began to bend and we were reeling in what seemed to be a record-setting catch. The end result was a handsome 9-lb chinook salmon – a respectable prize for my first attempt. Needless to say, I was thrilled with our catch and relished in the photograph session that occurred upon our arrival back at the dock. I was reluctant to leave my new found fishing paradise but knew that the “skins” equivalent of my trip would be just as enjoyable.

Like many reputable golf destinations, Vancouver Island has established a “Golf Trail” that showcases many of the island’s best golf courses. Extending 500 kilometres along much of the island’s east coast, the trail features ten championship golf courses and some of the finest resort properties in the province. In total, I had the privilege of playing four golf courses during my visit, all of them participants on the Vancouver Island Golf Trail.

My introduction to Vancouver Island golf began at the Storey Creek Golf Club, a 6,699-yard, Les Furber design located minutes south of Campbell River. Storey Creek has received many accolades over the years including a Top 100 ranking in Canada’s Score Golf magazine and a prestigious 4-star rating by Golf Digest. What I recall most about Storey Creek were the towering trees that encircled the fairways and the intimate feeling the forests provided on every hole of the golf course.

After Storey Creek, it was off to the Fairwinds Golf and Country Club; another Les Furber design perched along the edge of a rugged peninsula in Nanoose Bay. Fairwinds was a personal favourite as the golf course weaves its way through a beautiful residential community providing spectacular vistas of the Strait of Georgia. What appealed to me most about Fairwinds was its modest length – 6,151 yards from the back tees. The golf course was a refreshing change from many of the 7,000-yard + modern designs that require more brawn than brains. Despite its modest length, Fairwinds is a formidable test as many of the fairways are narrow and the par 3’s deceptively long. After your round of golf at Fairwinds, I’d recommend having lunch at the neighbouring Schooner Cove hotel and marina – especially if you’re a seafood connoisseur. It was here that I experienced an unforgettable crab dinner.  A variety of seafood delicacies are freshly prepared by the restaurant everyday making this certainly worth the stop.

After departing the Naniamo region, I continued my journey south to Victoria where I would play the island’s two best golf courses – the Olympic View Golf Club and the new Jack Nicklaus-designed Bear Mountain Golf and Country Club. 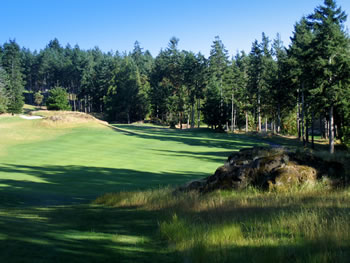 Olympic View is an outstanding golf course that features one of the best par 4’s in Canadian golf. I am referring specifically to the 417-yard, par 4, 17th hole that left an indelible impression in my mind because of its natural beauty and the integrity of the hole’s design. How many holes can you think of where the backdrop to your approach shot is a cascading 60-ft. waterfall? The 535-yard, par 5, 18th hole is equally impressive providing a formidable finish to a very memorable golf course. 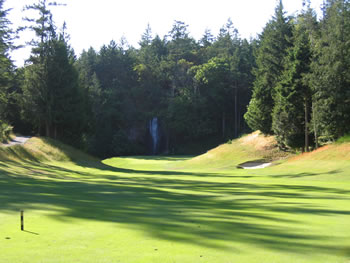 The final round of golf on my Vancouver Island experience was played at Bear Mountain, an outstanding 7,212-yard championship golf course designed by the legendary Jack Nicklaus. Opened in August 2003, “The Bear” is not only the best golf course on the island but one of the finest golf courses in Canada. Unofficially regarded as the patriarch of Vancouver Island golf courses, it is fitting that “The Bear” was designed by the patriarch of the game itself. What makes Bear Mountain truly exciting is that the best has yet to come as the golf course is part of a major resort and residential development that, upon completion, will feature two 18-hole golf courses, a 5-star hotel, fitness centre, spa and fine dining.  This is not only golf at its finest – it is living at its finest. Its no wonder that Victoria is one of the fastest growing communities in Canada. 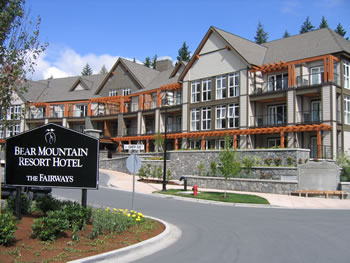 My stay in Victoria was brief but still provided me with a real sense of what makes this a charming Canadian city. I have often said that if I had to choose to live in one other city in Canada it would be Victoria. Its all-English charm, clean streets, and proximity to the Pacific Ocean are what make Victoria so appealing to residents and visitors alike. For a town with only 350,000 residents there is plenty to do and see. An absolute must is to visit the city’s historic Fairmont Empress Hotel, a 97 year-old Canadian landmark named after Queen Victoria. 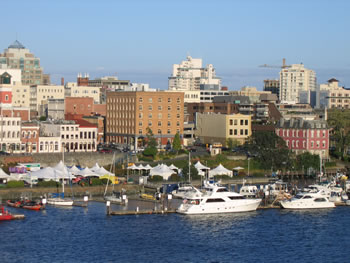 Whether it is for afternoon tea or dinner in the elegant “Empress Room” you’ll certainly feel like you’re in a special place.

The same can be said about Vancouver Island as a whole. It truly is super and natural.