Prince Edward Island may be best known for its tasty spuds and lore of Anne of Green Gables but in Canada’s golf circles, our smallest province packs this country’s biggest golf punch. 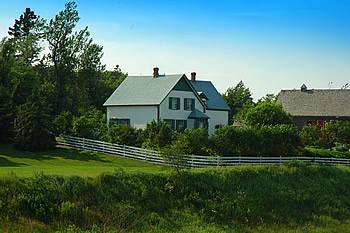 With more than 30 courses to play (32 to be exact), including 10 of the top 100 in Canada, PEI defines the meaning of outstanding golf destination. All are located within a 90 minute drive of Charlottetown (pop. 40,000), the province’s diminutive capital and focal point.  It was here in 1864 that the provinces of New Brunswick, Nova Scotia, Ontario and Quebec met to form the new nation of Canada. Province House and Founders’ Hall remain the cornerstones of the city and popular visitor attractions for history and non-history buffs alike.

For the 140,000 residents who live here, PEI is simply referred to as “The Island,” as if it were the only one in the world.  Those who were born elsewhere are from “off island” or more commonly, “from away.” 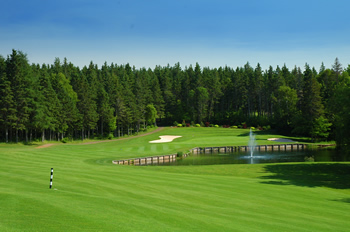 Don’t worry though. Within minutes of your arrival you’ll likely be greeted with a warm welcome and simple, “where you from?” alleviating any feeling of being “from away.”

Most first time visitors are surprised by how much there is to experience in such a small place. While the pace on the Island may be a little slower than you’re accustomed to, PEI’s culture and cuisine is vibrant and exciting. For shellfish lovers nothing rivals a serving of PEI mussels or Malpeque oysters. The Islanders are famous for their lobster suppers and backyard Ceilidhs (Gaelic for party or good time) where time with friends and family takes precedent over all else. For the many urban dwellers who visit, PEI’s most redeeming quality is its rural charm providing a welcome and refreshing change from the frenetic pace back home. 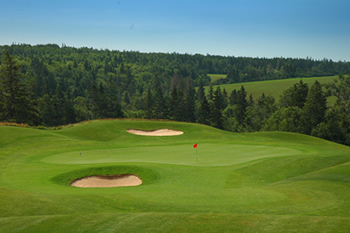 For avid golfers, it may come as a surprise that in 2011, PEI was named the Undiscovered Golf Destination of the Year by the International Association of Golf Travel Operators (IAGTO). So much for being undiscovered. Our little golf secret out east is quickly emerging as one of the best golf destinations anywhere in the world.

So with over 30 golf courses to choose from where should you play? Having recently visited the Island to savour as much golf as I could possibly ingest over a 1 week stay, the following is a golf itinerary that even a tour pro would envy.

Upon your arrival in Charlottetown, I recommend heading west to Mill River Provincial Park to experience the 6,885-yard Mill River Golf Course. 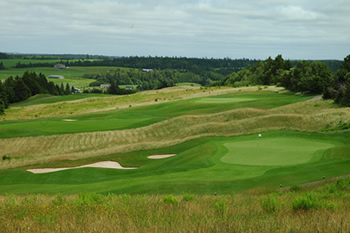 Originally designed by Robbie Robinson in 1971, Mill River was later reconfigured by architect Graham Cooke and, in 2008, was the host of the Golf Channel’s Big Break. Although somewhat removed from the rest of the Island’s golf courses, Mill River is certainly worth the drive.

From Mill River, return east toward Summerside. Instead of returning to Charlottetown I suggest heading northeast towards Cavendish and the Green Gables Shore to experience several of the best golf courses on the Island including Eagles Glenn, Glasgow Hills and the newly redesigned Green Gables Golf Club.  All are championship designs that sprawl over open, rolling hills where flat lies are as common as a Toronto Maple Leaf playoff berth. This is the most popular area of the Island as it is here, minutes from Cavendish National Park, that the legend of Anne of Green Gables was born. 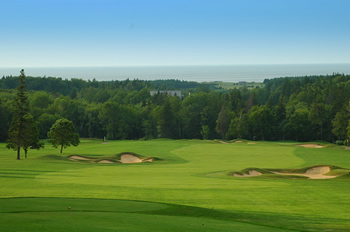 While the Anne of Green Gables homestead may be the main draw for many, it is the exceptional Green Gables Golf Club that will entice golfers to the area. Originally designed by Stanley Thompson, the patriarch of Canadian golf course architecture, Green Gables now rivals its more famous brethren – The Links at Crowbush Cove and Dundarave – as being the best golf course on the Island. The view from the 3rd tee overlooking the Gulf of St. Lawrence is unparalleled, so much so that you’ll want to return for a prolonged second look. In 2008, Thomas McBroom added his two cents by turning Thompson’s 1939 good design into a truly great one. 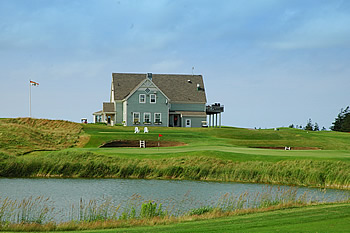 Within 20 minutes of Cavendish is the 6,903-yard Links at Crowbush Cove. Located along the north shore, Crowbush is the golf course that put PEI on the world golf map. Another McBroom gem, Crowbush is renowned for its wind sculpted dunes and ocean-side holes. Since its opening in 1994, Crowbush has received as many accolades as Jack Nicklaus has won major championships. I’m not sure if it was the salty smell of the ocean, the sound of the pounding waves, or the sight of the setting sun as I putted out on the 16th green that I remember most about my day at Crowbush.  Fortunately all are indelibly etched in my mind as is every one of the holes on the golf course.

No PEI golf trip would be complete without a visit to the east coast and the Brudenell River and Dundarave golf courses. The 6,541-yard Brudenell golf course is widely recognized as the most popular course on the island renowned for its generous fairways and manicured greens. Designed by Robbie Robinson, what makes Brudenell a fun and exciting challenge is its six par 3, six par 4 and six par 5 course configuration. 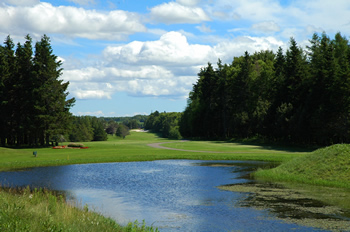 Despite my affection for Green Gables and Crowbush, I have to confess that the 7,089-yard Dundarave Golf Course tops my list of PEI golf courses. In fact, I think Dundarave is a top 10 Canadian golf course, as you would be hard pressed to surpass its beauty and design anywhere in Canada.  Designed by the dynamic duo of Dr. Michael Hurzdan and Dana Fry, Dundarave has been receiving “rave” reviews from the moment it opened in July 1999. The course has so many redeeming features but it is the ever present, rust-coloured sand bunkers that set Dundarave apart.

Many years ago, Lucy Maud Montgomery, the famous author of Anne of Green Gables wrote about an encounter between two maritime gentlemen.  “He said he was from the “island,” said the one man to the other. What island, asked the listener? “Why Prince Edward Island, man! What other island is there?”
I’m willing to bet that after a visit to Canada’s “little island on the sea” and experiencing all it has to offer you’ll be saying the same thing!