As the Pan Am Games wind down this weekend, Toronto’s sporting spotlight will shift focus and turn to the RBC Canadian Open, the pinnacle event in the realm of Canadian golf. This year’s championship returns to the Glen Abbey Golf Club, Canada’s most famous golf course, in neighbouring Oakville, Ontario, thirty minutes west of Toronto. 2015 marks the 106th anniversary of one of golf’s oldest championships and the 27th time Glen Abbey has hosted the best golfers in the world who will compete for a share of the $5.8 million US purse with over $1 million going to this year’s champion.

What makes the RBC Canadian Open special is that you don’t have to be a golfer to enjoy one of Canada’s most exciting sporting events. In addition to watching many of the game’s greatest players work their magic with a golf ball, the best part about experiencing the RBC Canadian Open for the first time is simply just being there and taking it all in. 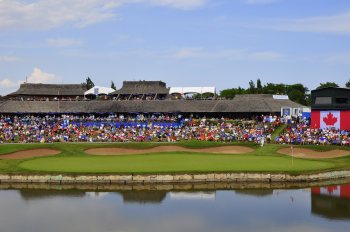 Fans beside the 18th green

If you came on Friday you would have witnessed “Red and White Day”, the day spectators and some players, including Aussie Jason Day, proudly dawned Canada’s colours from head to toe.

Tickets are readily available and can easily be purchased through Golf Canada’s website or at the front entrance upon arrival. I recommend an “Any Day” pass which will cost you a reasonable $80 (HST included). In terms of entertainment value, it sure beats the price of a Leaf ticket! It gets even better because kids under 17 get in for free all weekend. That’s right – for FREE! How many other sports do that for kids?

If you’ve never been to a Canadian Open you’re in for a real treat this year. The field of players is the best in years and includes two-time Masters Champion Bubba Watson, two-time US and British Open Champion Ernie Els, and two-time RBC Canadian Open Champion Jim Furyk. Top Canadians Graham DeLaet and David Hearn are two of 16 Canucks hoping to do something that hasn’t been done in over 60 years – win the Canadian Open, a feat last achieved by Pat Fletcher in 1954. 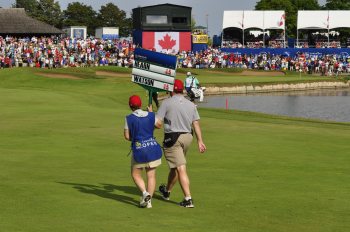 The walk up 18th fairway

There is a reason why Glen Abbey has hosted our national golf championship 27 times. It was built specifically for this event so fans could watch the best players on the planet do what they do best – hit the ball a mile and do things with a golf ball that defy the laws of science.
So what should you do this weekend when you go to the RBC Canadian Open? My recommendation is to check out the driving range first and watch some of your favourite players warm up. In all likelihood, you’ll probably get an autograph or two.

Afterwards, you can do one of two things. If you’ve never been to Glen Abbey before, I suggest walking the entire golf course and seeing all 18 holes. Be prepared for a long haul especially as you descend into the valley which features holes 11 through 15. This is the best part of the golf course and worth the walk and extra effort. If a 7,000-yard or five mile trek is closer to a week’s worth of exercise, the more leisurely alternative is to find a place on the course and let the players come to you. On the front nine, there are two locations where you can park yourself. The first is behind the 1st tee. From here you can see everyone tee off and start their round. Immediately behind you is the 6th green. I also like the hill behind the 4th green and 5th tee. 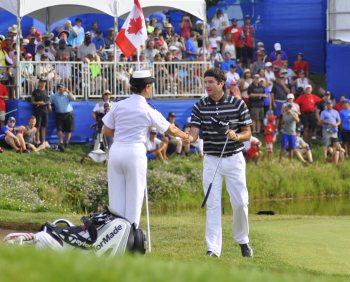 Again, you’re in the ideal place to see continuous action as you’ll be able to watch two groups of players throughout the day.
On the back nine, the best place to grow roots is behind the 14th green and 15th tee. From here, you can move freely back and forth between holes. It is behind the short, par 3, 15th hole that you will feel like you’re standing on the tee and rubbing shoulders with the players.

On Sunday afternoon there is only one place to be and that’s somewhere around the perimeter of the 18th green. This is the signature hole at Glen Abbey simply because some of the best finishes in golf have happened here over the years. It’s what Jack Nicklaus envisioned when he designed Glen Abbey nearly 40 years ago. 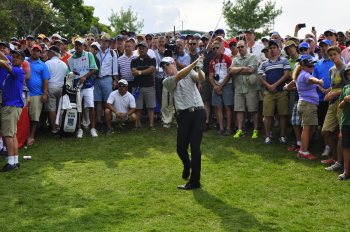 One of the best shots ever hit happened here in 2000 when Tiger Woods launched a 213-yard 6-iron from the fairway bunker over the water resulting in a one shot victory over Grant Waite. 2004 was equally exciting as this was the year Vijay Singh had the nerve to defeat Canada’s own Mike Weir in a playoff that concluded on the venerable 18th hole. The stage is set this weekend for another exciting finish at this year’s RBC Canadian Open. While golf may be the world’s game, this is our Canadian Open. As I said, you don’t have to be a golfer to enjoy one of Canada’s most storied sporting events. Just come, sit back and let the action come to you. What could be better than that.