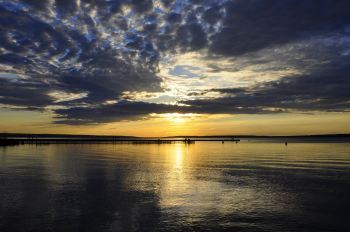 Land of the Living Skies

There is only one thing that the people of Saskatchewan cherish more than their beloved Roughriders and that’s the game of golf. When both are in season there is no better place to live in Canada than in the land of the “living skies” where the summers are warm and the days are long.

It was for this reason that I decided to head west and experience the best golf Saskatchewan had to offer. To my credit, this was well before PGA Tour star Graham DeLeat became a household name and put Weyburn, Saskatchewan on the map.  Golf in Saskatchewan you ask? OK, I’ll admit that when you think of a summer golf destination the province of Saskatchewan doesn’t exactly come to mind, but as the saying goes, “don’t knock it until you try it!”

So try it is precisely what I decided to do.

To truly experience golf in Canada’s prairie province means being willing to log a few miles between golfing venues. On my circuitous trip that took me from Regina north to Nipawin, west to Prince Albert and then south to Saskatoon, all I needed was one week, a few tanks of gas and my golf clubs.

Regina or Saskatoon are the two main urban centres in the province that you could start your trip from. Regina, the capital, is a government town with a population of approximately 200,000. Latin for queen, Regina adopted its namesake in 1882 in honour of the reigning monarch, Queen Victoria. It was the Queen’s daughter, Princess Louise, who suggested the name and is why Regina is often referred to as Canada’s Queen City.

If Regina is Saskatchewan’s “Queen City”, then Saskatoon is the province’s “Green City” as tree-lined streets, endless walking trails and river-side parks along the winding South Saskatchewan River provide outdoor enthusiasts with plenty to do. With a population of 250,000, Saskatoon is the province’s largest city and economic engine. Oil, wheat and potash are the main monetary drivers of the city whose name was derived from the Cree word, “mis-sask-quah-too-mina”, a sweet, violet-colored indigenous berry. 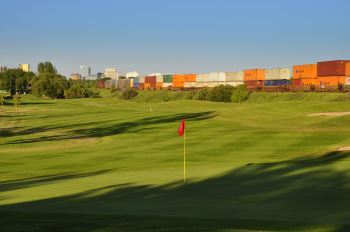 It was in Regina that I began my Saskatchewan golf odyssey. I decided to start here because I wanted to play the Royal Regina Golf Club, the first and oldest golf course in the province. Established in 1899, Royal Regina received its “Royal” designation from Queen Elizabeth II in celebration of its 100th anniversary in 1999, a prestigious honour that only five other clubs in Canada share. Stanley Thompson, the patriarch of Canadian golf course design, also has ties to Royal Regina having visited in 1925 to revise the original layout. Today, the golf course measures 6,512 yards and has hosted numerous provincial championships including the Saskatchewan Men’s Amateur Championship in 2008. Fortunately, despite its venerable status in Saskatchewan’s golf circles, Royal Regina is a semi-private golf club that welcomes guests and public play. 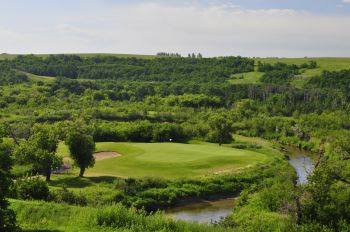 Another golf course in the Regina area worth visiting is the 6,777-yard Deer Valley Golf Club. Located in the scenic Qu’Appelle Valley, 30 minutes from town, Deer Valley will quickly dispel any preconceived notions you have about Saskatchewan’s terrain being flat and uninspiring. On the contrary, as the course weaves its way out and back along the Wascana Creek ascending numerous times to heights not befitting of a prairie landscape. 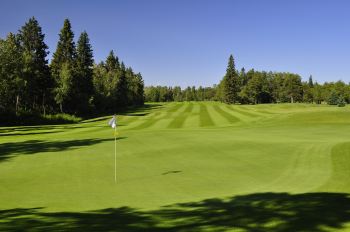 From the Regina grasslands I headed north to the small town of Nipawin (pop. 4,000), famous for its pristine lakes and extraordinary fishing where pickerel, northern pike and whitefish are plentiful. In terms of favourite local pastimes, golf comes a close second to the rod and reel as the number of available tee times at the popular Evergreen Golf Course are not quite as abundant as the amount of fish that populate the hundreds of surrounding lakes.

As the name suggests, Nipawin’s Evergreen Golf Course features a plethora of northern Saskatchewan pine and spruce trees that hug the fairways from tee to green. The course measures a modest 6,531 yards but the tight, tree-lined fairways and small greens provide more than an adequate challenge. The golf course is part of a regional park and comfortable accommodations at the Northern Greens Resort are a mere 9-iron away from the pro shop. 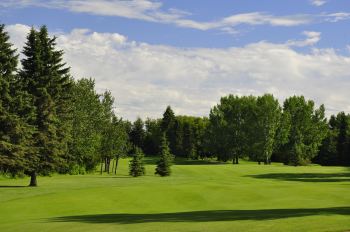 From Nipawin I headed west for approximately two hours to the pulp and paper city of Prince Albert, Saskatchewan’s “Gateway to the North” and home to the 6,299-yard Cooke Municipal Golf Course. Don’t be misled by the name as this is unlike any municipal golf course you’ve ever played. In fact, it’s so good I would include it on Score Golf’s Top 100 Courses in Canada list. The origins of the golf course date back to 1925 when it was known as the Prince Albert Golf Club. In 1935, Hubert Cooke, the club’s first golf professional, negotiated a long term lease with the city which resulted in the name being changed to the Prince Albert Municipal Golf Course. Fast forward to today and it is more than appropriate to see this twentieth century gem adopt the namesake of the man that was instrumental in bringing golf to Prince Albert.

After departing Prince Albert, I continued north for approximately one hour to the resort town of Waskesiu where two of Saskatchewan’s best golf courses awaited. Both are situated in the Prince Albert National Park area near the shores of beautiful Waskesui Lake, a popular summer vacation community that attracts visitors from across the province and Canada. It is at this latitude and beyond that makes Saskatchewan the unique and special place that it is. Long gone are the southern prairie grasslands as you are now in Saskatchewan’s Boreal Forest region where trembling aspen and other deciduous trees like white birch and balsam poplars dominate the landscape. 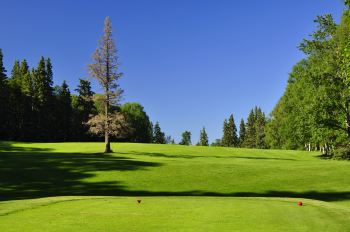 The first course I played was the famous 6,301-yard Waskesiu Golf Course, otherwise known as the “Lobstick”, for the directional tree that graces the middle of the first fairway. According to native legend, after removing the lower branches, a tree could effectively be used as a navigational marker. This practice was used by the area’s early settlers and fur traders. Today’s “lobstick” tree serves as a guide off the first tee and historical reminder of Waskesiu’s rich past. Adding to the Waskesiu aura is the fact that the golf course was designed by the legendary Stanley Thompson who first visited the area in 1927 and completed the original routing. The course officially opened in 1935 providing plenty of history and clubhouse tales to savour during your visit to Waskesiu. I’d recommend playing with a member who will likely tell you about the annual “Lobstick Open” and provide you with invaluable reads while putting on Mr. Thompson’s small and treacherous greens. 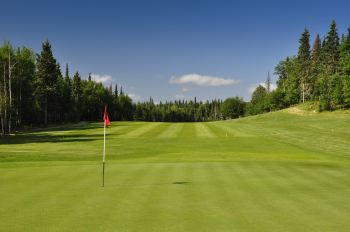 The second course I visited may not have the same pedigree as Waskesiu but Elk Ridge Resort is every bit the golf experience. Featuring three distinct nines appropriately named after the aspen, tamarack and birch trees that engulf the fairways, Elk Ridge is a year-round, 5-star resort that recently won Trip Advisor’s Certificate of Excellence award and Reader’s Digest, “One of the Ten Must-Visit Canadian Resorts”.

After fully immersing myself in all twenty-seven holes at Elk Ridge, it was time to depart and embark on the 2.5 hour drive south to Saskatoon. My Saskatchewan golf adventure was drawing to a close but I had one more stop to make before returning home. For years I had heard about one design in particular that was consistently rated the best golf course in the province by the likes of Score Golf and Golf Digest. Fittingly, it was the last venue on my itinerary and arguably my favourite, although I feel somewhat guilty for saying so given all the great courses I had previously played. 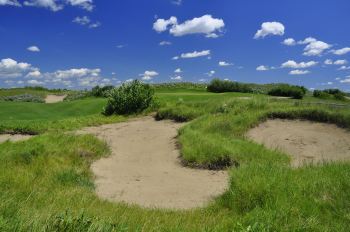 Dakota Dunes Golf Links is that course. Located 30 minutes from Saskatoon on the crest of the South Saskatchewan River Valley basin, Dakota Dunes is prairie links golf at its best. It’s totally natural and wild, as rugged sand bunkers and fescue bordered fairways provide an authentic links experience. Designed by Graham Cooke, Dakota Dunes measures a distant 7,301 yards from the back tees and has hosted the PGA Tour Canada’s Dakota Dunes Open since 2008. Past champions include the likes of Graham DeLaet, Matt Hill, Adam Hadwin and Brad Fritch. It’s a golf course more than deserving of all the accolades it has received since its auspicious opening in 2004.

Walking off the 18th green at Dakota Dunes brought my Saskatchewan golf adventure to a close. After one week, 1,200 kilometres, a few tanks of gas and copious amounts of coffee, I had now played not only seven of the best golf courses in Saskatchewan but several of the finest courses in Canada.

Forget the labels used to describe Saskatchewan – it’s not just a giant flat expanse of wheat fields and football-crazed westerners. It’s a golf destination that’s as good as any I’ve experienced in Canada. So the next time you’re sitting around the table with a few of your friends planning your next summer golf getaway, give some thought to heading west and checking out the land of Roughrider green.