Watching the Open Championship on ABC

Watching the Open Championship on ABC

Was I imagining things or did it seem like there were an inordinate number of commercials during this past weekend’s airing of the British Open Championship? 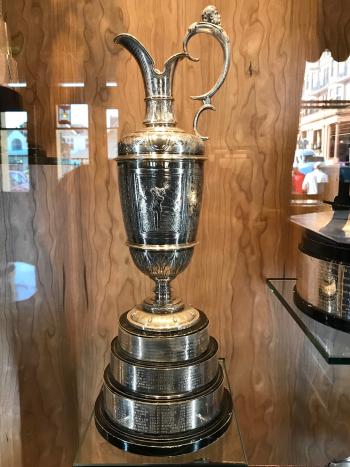 This year the 137th edition of the Open Championship was played at Royal Birkdale in England, and, as in the past, was televised by the American Broadcasting Company (ABC).  As I have done for many years, I anxiously woke up early on Sunday morning to watch the final round of golf’s third major and arguably most coveted championship. Despite the absence of Tiger Woods, this year’s Open Championship was turning out to be one for the ages (literally) as 53-year old Greg Norman held a 2-shot lead over Irishman and local favorite Padraig Harrington going into the final round. In addition to the resurgence of the Great White Shark and his quest for a third Open title, the weather also emerged as a headline news story. Relentless 40 mph winds wreaked havoc from start to finish resulting in stratospheric scores typically reserved for those of us who work in the industry but don’t make our living playing the game.

The Sunday morning telecast began at 8am EST. ABC’s versatile commentator Mike Tirico was joined by Paul Azinger and 5-time Open Champion Tom Watson to provide final round coverage. The stage was set for a great morning of golf and I was as excited as ever anxiously awaiting the 9:20am final pairing of Greg Norman and Padraig Harrington.

It was within the first hour of watching the event that I noticed the coverage being interrupted for yet another commercial break. Perhaps I was expecting something similar to watching the Masters on CBS or even the Open Championship on Britain’s own BBC where commercials are the exception not the norm.

To confirm my suspicions, I decided to count the number of commercials ABC aired over a 70-minute period (between 9:47 am and 10:57am) during final round coverage. In addition, I also timed the length of each commercial break. To my surprise, here is what I discovered:

That’s 34 commercials over a 21 minute time frame. Phrased another way, if you didn’t move off your couch you spent 30% of your time watching television commercials; the majority of which promoted upcoming new shows soon to be aired on ABC stations. Despite my limited “research”, it became obvious that as I continued to watch the final round unfold this 70-minute segment would be indicative of ABC’s entire broadcast.

All of this leads me to ask the following question: Do the programmers at ABC really think people actually watch all of the commercials they televise? After 11am I found myself changing the channel at every commercial break only to return 3 minutes later to the live action.

So what is an avid golf enthusiast to do? Assuming ABC makes no programming changes in 2009, I’ve decided to do one of two things. I’m either going to go to next year’s Open Championship at Turnberry in Scotland or I’ll set my PVR to record the broadcast. Either way, I’ll be sure to do all that I can to avoid ABC’s “another break in coverage” or showing of “another bloody commercial”.