Barbados – The Caribbean’s Playground for the Rich and Famous

Barbados – The Caribbean’s Playground for the Rich and Famous

Over the years I have had the privilege of traveling to several islands in the Caribbean but never had the opportunity to visit Barbados – until last November. Barbados was a place I had always wanted to experience having heard so much about its British heritage, pristine beaches and spectacular evening sunsets. Geographically, Barbados lies remotely in the Atlantic Ocean one hundred miles east of St. Lucia and is a 5 ½ hour direct flight from Toronto’s Pearson International Airport. Geologically, Barbados is relatively flat compared to many of its nearby volcanic island neighbours that comprise the Lesser Antilles archipelago. 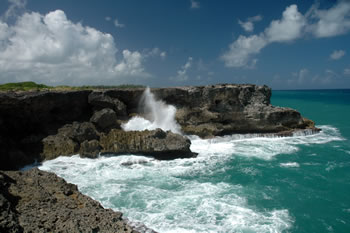 Besides its perfect climate and idyllic surroundings, what impressed me most about Barbados were the Bajan (Barbadian) people. Polite and reserved, Bajans are always quick to greet you with a smile and assist if asked. In addition, Barbados is an extremely safe country, a place you can wander freely and undisturbed, a claim that many other Caribbean islands can no longer make.

Barbados’ longstanding British heritage dates back 340 years – from the first established settlement in Holetown in 1627 until independence was granted in 1966. Regarded as the “most British” island in the Caribbean, this “Anglo” influence prevails today as evidenced by the local manners and customs of the Bajan people. In keeping with British tradition, many Bajans worship at the nearby Anglican Church, partake in daily afternoon tea, consider cricket to be the national pastime, and dress appropriately for dinner. Despite its adherence to British custom, Barbados is surprisingly laid back and unpretentious. It is however, a place of affluence and wealth as this tiny island is the favorite tropical getaway of some of the world’s wealthiest businessmen and celebrities that include the likes of Eugene Melnyk, Oprah Winfrey and Tiger Woods. “All-inclusive” is an unfamiliar term and you can forget about all-you-can-eat buffets. In Barbados, everything is done in a more sophisticated and refined kind of way.

Renowned for its luxurious beachfront resorts, private million-dollar villas and exquisite restaurants, the west side of Barbados is appropriately referred to as the “platinum coast”. Most vacationers either stay on this side of the island or the busy south coast which is famous for its trendy shops, ocean-side restaurants and bustling night life. Bridgetown, the nation’s capital and commercial centre, is located on the south west coast of the island and provides employment and accommodation for most of Barbados’ 280,000 residents. The east (Atlantic) side of the island is the least inhabited and developed area in Barbados. Its rugged, mountainous terrain and pounding ocean surf provide a completely different experience than basking quietly on a tranquil west (Caribbean) coast beach. 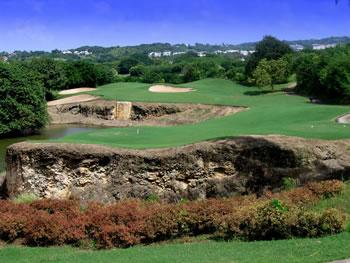 The rolling terrain of Royal Westmoreland

It would be inaccurate to describe Barbados as a true golf destination. Unlike the Dominican Republic or Jamaica, Barbados does not have thirty to forty golf courses to choose from. Instead, Barbados features four outstanding 18-hole golf courses that are regarded as being the finest designs in the Caribbean. The Barbados Golf Club is the island’s only public golf course catering to visitors and members alike. The course was redesigned in 2000 by golf course architect Ron Kirby and extends a formidable 6,805 yards. 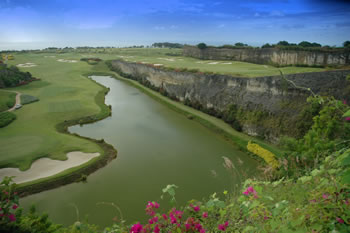 The Green Monkey at Sandy Lane

The Royal Westmoreland Golf Club is world-class in everyway imaginable. Designed by Robert Trent Jones Jr., the course extends 6,870 yards through the former 500-acre Westmoreland Sugar Estate. I wouldn’t describe Royal Westmoreland as a public golf course as the 180 members who paid $25,000 US to join are given first priority to all of the club’s amenities and tee times. Nevertheless, depending on the time of year, public play is permitted. The golf course is an excellent test for even the most accomplished player having recently been ranked #16 by Golf Digest as the best golf course outside of the United States. If you’re fortunate enough to play the course you may even catch a glimpse of 1991 Masters Champion, Ian Woosnam, who has a home overlooking the 18th fairway and considers the par 3’s at Royal Westmoreland among the best he has ever encountered. 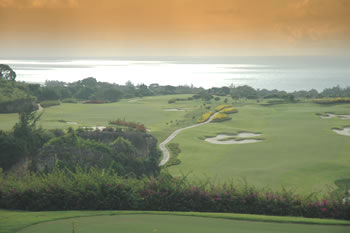 Golf and Sea in Barbados

Without question, Barbados’ crown jewels are the two golf courses at Sandy Lane. There are few places on the planet that compare to Sandy Lane as this premium golf resort redefines the meaning of “expensive” and “exclusive”. Acclaimed golf course architect Tom Fazio designed both golf courses – the most enjoyable 7,060-yard Country Club and the awesome 7,389-yard Green Monkey.

Forget about playing the Green Monkey as play is reserved for hotel guests willing to spend upwards of $850.00 US per night to stay in the incomparable 112-suite Sandy Lane Hotel. In 2005, Tiger Woods rented the entire resort to celebrate his wedding with family and friends. This is an unparalleled experience and if money is not an issue, even for just a week, then Sandy Lane is the place for you. 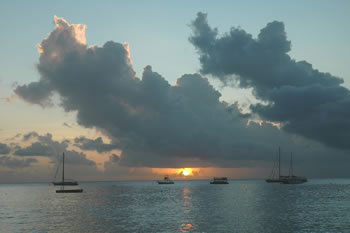 It’s true that Barbados is a playground for the rich and famous. However, even if you’re not one of the world’s well-heeled few, there are still plenty of affordable restaurants, hotels and leisure activities available. Best of all, the warm and friendly people of Barbados will be sure you always feel welcome regardless of who you are.