It was Albert Einstein who said, “If at first an idea does not seem absurd, then there is no hope for it”. That’s what people said when it was first proposed that Alabama enter the golf business using funds from the state’s employee pension fund. It was Dr. David G. Bronner, the CEO of the Retirement Systems of Alabama, who saw something that no one else did.  The plan called for a $100 million investment to create the Robert Trent Jones Golf Trail, a network of championship golf courses along the state’s main highways. Despite harsh criticism, work began in the late 1980’s and the largest golf course construction project in U.S. history was underway. Seven sites were originally selected and the Robert Trent Jones Golf Trail was born.

Unbeknownst to his detractors, Bronner had a much grander plan than to simply build a bunch of golf courses to give retired Alabamians something to do. His vision was much more ambitious than that. Bronner’s mission was to grow the state’s struggling tourism industry, recruit business and industry and attract retirees to the area. What was once a widely criticized idea has transpired into a business model revered by every state, province and country interested in becoming a world-class golf destination.

Today, the Robert Trent Jones Golf Trail is now a carefully designed consortium of 468 holes of championship golf (26 golf courses in all) at 11 locations throughout Alabama. But Bronner’s vision included more than just golf. His strategy was to create stay and play destinations in every major urban area throughout Alabama by bundling golf and accommodation together. You know, roll out of bed, have breakfast then head over to the first tee for your 9:15 am tee time. To complete each Trail experience, a partnership with Marriott and Renaissance Hotels was established to provide legitimacy to the stay and play concept.

Bronner’s mission was simple. Provide a five-star golf experience at an affordable price for all. Fast forward twenty years and mission accomplished. Over the past decade, Alabama’s tourism industry has increased from $2.5 billion to $9.3 billion. Pretty good return on investment. No one is questioning Bronner’s decision anymore. In fact, they now refer to him as Saint David throughout the state (just kidding).

Green fees average $50, peaking at $64 during the high season, plus $15 cart fee per person. To play comparable courses in Arizona or Florida in the winter would cost you 3 to 4 times as much. Recently, Frequent Flyer magazine named the Trail “One of the Top Ten Trips in the World”, and in a Golf Digest survey, the Trail was ranked #1 in the world for value and # 8 for quality. 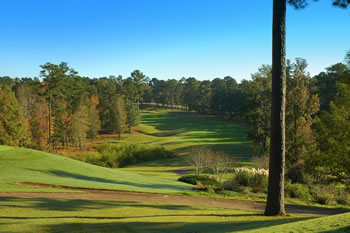 So where should you start your Robert Trent Jones Golf Trail experience? One of the most appealing attributes of the Trail is that you can start from anywhere in the state. From Mobile in the south to Huntsville in the north, it really doesn’t matter, although there are more Trail courses around the Birmingham area than anywhere else. Each of the 11 stops is within a two-hour drive of the next closest Trail course and within 15 minutes of a major interstate. If you’re directionally challenged, don’t despair as there are plenty of road signs to help you get from one location to another.

I started my trip on the Trail in Auburn/Opelika. I visited in early November, a perfect time of year, as temperatures were around 15 degrees and the autumn colours were ablaze. Yes, autumn colours in Alabama. Who knew? I often joke with some of my American friends about how “provincial” they are in their thinking. Most don’t know much about Canada other than we’re good at hockey. I have to confess, I had no idea Alabama had mountains or trees that turned colour in the fall. I was certainly surprised when I saw landscapes that were more indicative of Ontario than Florida, which is what I expected. Alabama is geographically diverse due to the Appalachian mountain range that extends from the northeast to the centre regions of the state. The end result is the ideal topography for an assortment of outstanding golf courses.

Featuring 54 holes, the Grand National in Auburn/Opelika is where it all began almost 20 years ago. This was the first Trail course to open and was praised by iconic golf course architect Robert Trent Jones Sr. as the “greatest site for a golf course I have ever seen.”
As with all the multiple course Trail locations, it doesn’t matter which golf course you play. At Grand National you have your choice between the 7,194-yard Lake Course or the 7,311-yard Links Course. In 1993, the Links Course was named by Golf Digest as the 2nd best new public course in America, the Lake Course 4th best. Built on 600-acre Lake Saugahatchee, 32 of the 54 holes wind alongside its pristine shores.

The “Short Course” at Grand National is one of the seven par-3 layouts you’ll find on the Trail. True to Robert Trent Jones Sr. form, the short courses he designed are unlike anything you’ve likely seen before. In fact, the term “Short Course” is somewhat of a misleading moniker as most of the holes range from 150 to 250 yards from the back tees. 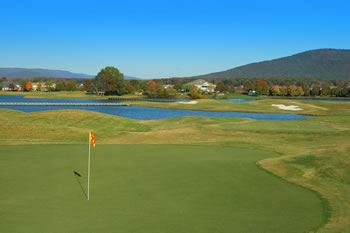 Traveling northeast, my next Trail stop took me to Huntsville, home of Hampton Cove, one of the seven original Robert Trent Jones sites. I played the 7,262-yard, eclectic Highlands Course, a course that featured a good variety of parkland, water and links-style holes. Unlike most of the other Trail courses I experienced, the two golf courses at Hampton Cove are easy to walk – something I appreciate more the older I get. Hampton Cove’s other championship layout is the 7,667 River Course. Built on former soybean fields in the flood plain of the Flint River, the golf course has the unique distinction of being the only course on the Trail without a sand bunker. 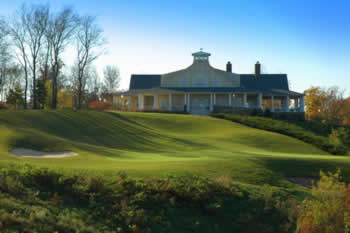 From Huntsville, I headed west for 65 miles along US Highway 72, to the area of the state referred to as “The Shoals”, a region that encompasses the cities of Muscle Shoals, Florence, Sheffield and Tuscumbia. Although somewhat removed, it is here that you’ll find two of the best golf courses on the Trail. The 8,092-yard (yes, you read that correctly) Fighting Joe Course was named after General Joseph Wheeler (1836-1906) who served in the Confederate and U.S. armies and later was elected to the Alabama state legislature. Opened in 2004, The Fighting Joe Course was the first Trail course to exceed 8,000 yards. As the name implies, this course comes out swinging and never lets up. It can be really, really long if you lose your senses and decide to play from the back tees. Fortunately the fairways and greens are generous so you’ll be able to see where you’re going. The challenge, however, is getting there.

The second course at The Shoals is equally impressive. Named the “Schoolmaster” after Woodrow Wilson, the 28th President of the United States, and former President of Princeton University, this 7,971-yard track is a more traditional, tree-lined golf course nestled along the shores of the Tennessee River. Those in the know suggest the Schoolmaster is the more difficult of the two, but with both courses measuring approximately 8,000 yards it’s like comparing a Sudoku puzzle to a Rubik’s Cube. They’re both tough. Fortunately both courses feature 5 sets of tees to choose from so you’ll be able to play from a distance best suited to your game. Regardless of which course you play (try to play both), you’ll be treated to a memorable golf experience. 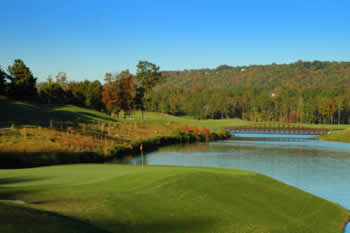 From the Shoals area, I headed south to Birmingham to experience the newest addition to the Trail, Ross Bridge. At 8,191 yards, Ross Bridge is the longest course on the Trail and the 4th longest golf course in the world. I’m not really sure why anyone would build a golf course this length where the back tees are in a different time zone. Other tee decks do exist making Ross Bridge one of the most popular venues on the Trail. Indicative of a parkland style course, ten holes extend along the shores of two lakes adjoined by a spectacular waterfall that drops 80 feet between the 9th and 18th greens. A gristmill has been thoughtfully added to the waterfall reflecting the history of this old mining site.

Complimenting the golf course is the 259-room Renaissance Hotel and Spa. Inspired by the famous Banff Springs Hotel, Ross Bridge has taken the “stay and play” experience to new heights. Without question, this 4 ½ Diamond property is the most luxurious of all the Trail accommodations. 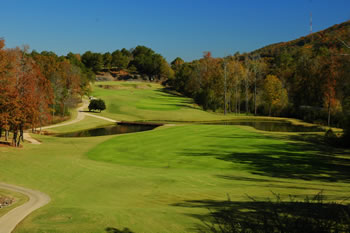 Also in the Birmingham area is Oxmoor Valley, a 54-hole facility that was built on land previously mined by U.S. Steel. Nestled in the forests and valleys of the Appalachians, the 7,055-yard Ridge Course and 7,194-yard Valley Course are renowned for their precipitous elevation changes and tight, tree-lined fairways. Like Grand National in Auburn, Oxmoor Valley was one of the Trail’s pioneers setting the stage for the other Trail destinations that would soon follow. To this day, Oxmoor Valley remains one of the most popular stops on the Robert Trent Jones Golf Trail rotation.

Perhaps the Trail’s most redeeming quality is that there isn’t a weak link in its golf chain. After playing several courses I’m sure one will emerge as your favourite. If you were to ask 10 different people what their favourite course on the Trail is you would undoubtedly get 10 different answers. No one destination stands apart from the others. They’re all great. I particularly liked knowing I could play a links course one day and a parkland course the next without having to drive 100 miles to get there. Here lies what makes Alabama’s Robert Trent Jones Golf Trail special.

Native Alabama resident and golf writer, Hershell Caldwell probably described the Trail best. “It is the Robert Trent Jones Golf Trail that provides an opportunity for the rest of the country to see and experience the “old” South with “new” eyes.” A fitting description given this state, more than any other, has endured many social and economic hardships over the years. With the recent crowning of the Alabama Crimson Tide as national college football champions and running back Mark Ingram being the first Tide player to win the Heisman Trophy, not many things rival ‘bama football in this state of 4.5 million people. But thanks to Dr. David G. Bronner and the Robert Trent Jones Golf Trail golf in Alabama may rank a close second, and deservedly so.